Mian (also know as Mianmin) is a Papuan (i.e. non-Austronesian) language of the Ok family. The Ok family of languages is named after their common word for ‘river’ ok. Within the wider Papuan context, the Ok languages are part of the Trans New Guinea family and show internal diversification similar to the Germanic languages. There are two main regional varieties of Mian, an Eastern and a Western one (also known as Wagarabai).

Noteworthy typological features of Mian include: 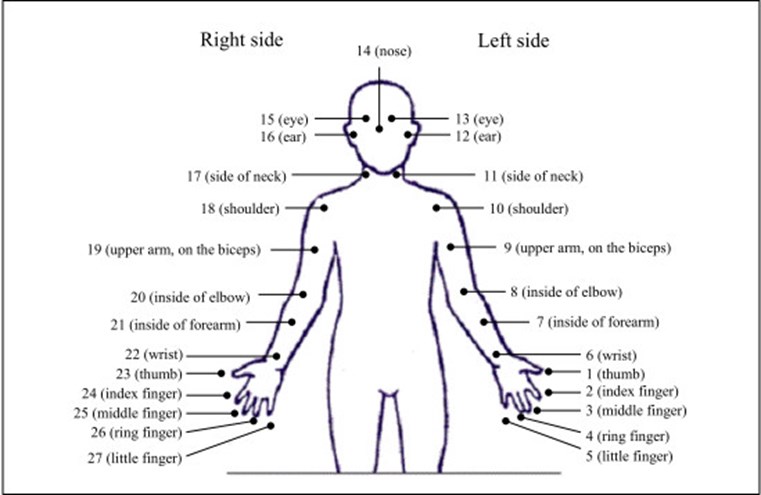 Around the body (tally) counting system

Mian is spoken in Telefomin district of Sandaun Province in Papua New Guinea. Geographically, the Mian area lies in the ‘Highlands fringe’ right in the middle of the island of New Guinea where ground elevation comes down to below 1,000 metres. The Mian area stretches from its westernmost extension, which is in walking distance from the 141st parallel (i.e. the border to West Papua/Irian Jaya), towards the East for about 80 kilometres. The land is rugged and remote, covered with primary rainforest and secondary growth and notorious for high rainfall. There are several interspersed airstrips and travelling is done either by plane or on foot. The first contact with westerners was in the mid 1930s. [Google maps insert]

The Mian people live in villages of up to a couple of hundred people. Their traditional spiritual culture, centred around the spirit house (haus tambaran in Tok Pisin), has been on the decline for more than five decades. The spirit house in Mianmin was dismantled in 1964. Although the Mian people have been completely christianized by Catholic and Baptist missionaries, traditional beliefs in magic and sorcery are still widely held by the people. 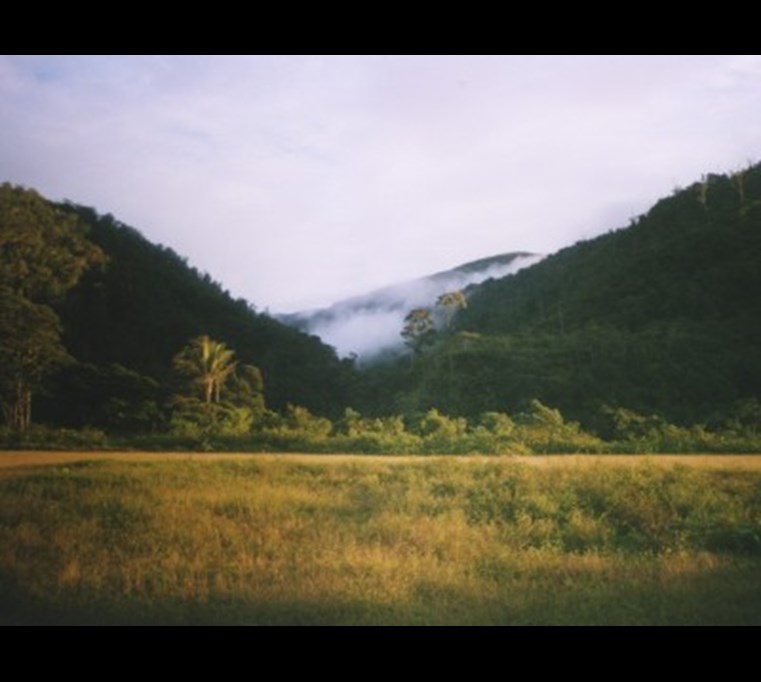 Mianmin landscape in the evening

The Mian area lies in the 'Highlands fringe' right in the middle of the island of New Guinea where ground elevation comes down to below 1,000 metres. 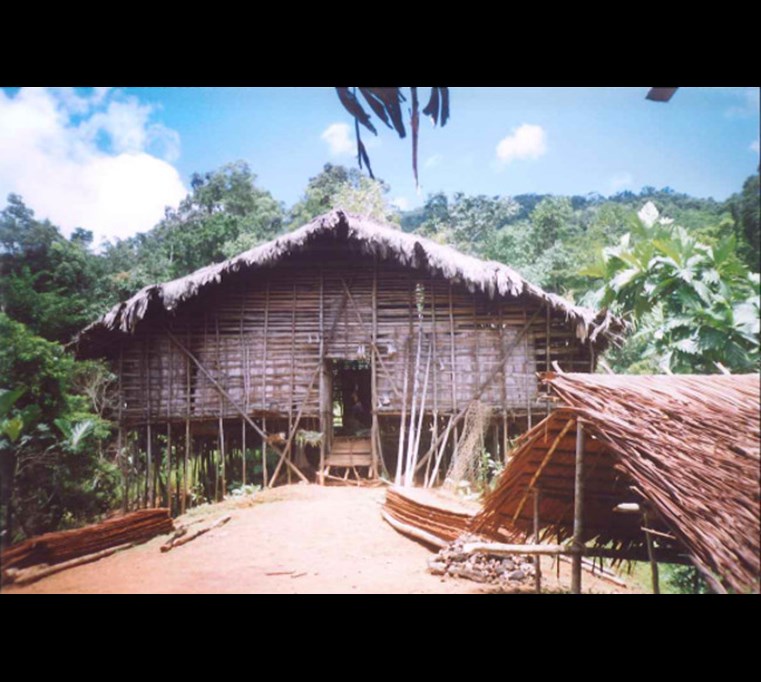 Traditional buildings in Mian - like this dancehouse - are built to be elevated above the ground and have rooves and wall panels made of dried, organic matter. 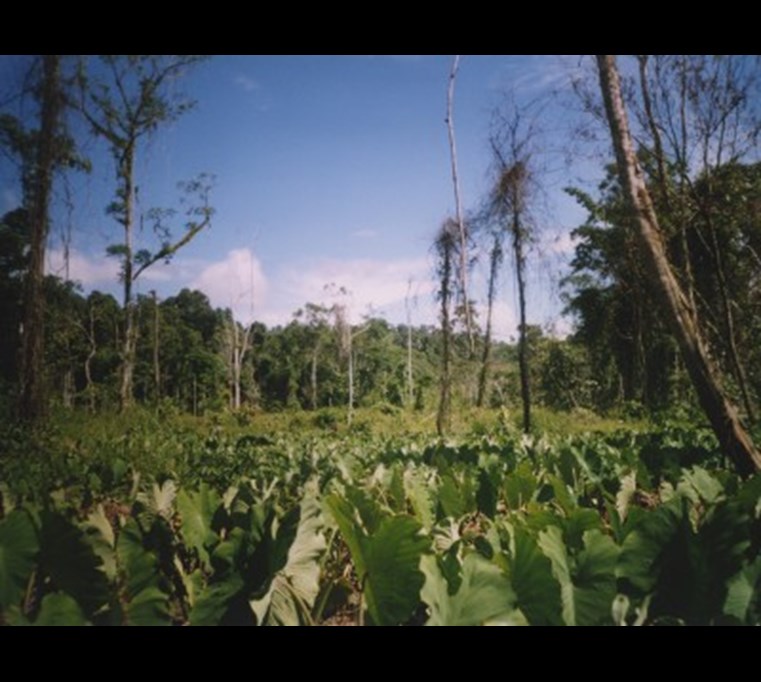 The staple crop of the Mian people is taro (C.esculenta), supplemented with sweet potato and cassava, all grown in local gardens, for which the forest is cleared (but rarely burnt). 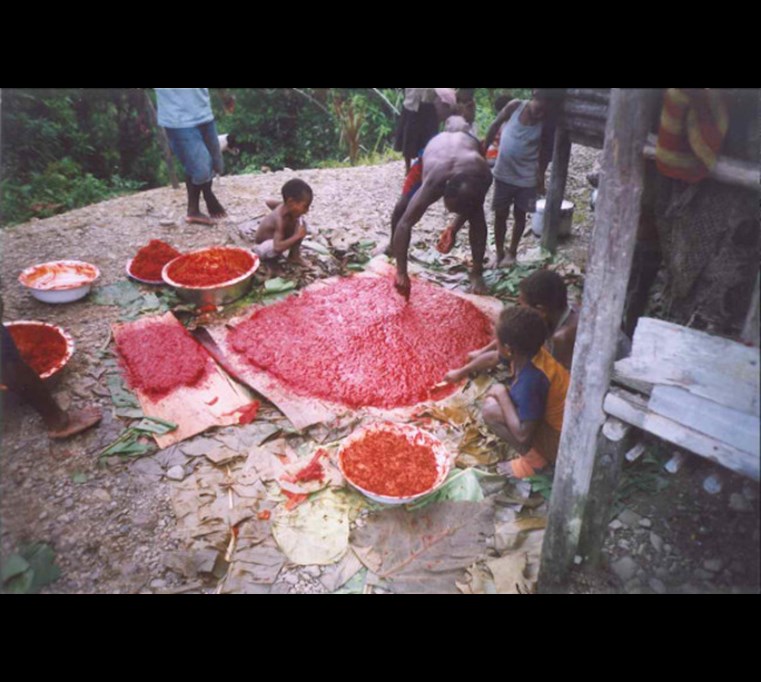 Documenting the preparation of Mianmin “pizza”, a taro dough covered with pandanus sauce made from the fruits of a palm-like tree (P. conoideus)

The staple of the Mian people is taro (C.esculenta), supplemented with sweet potato and cassava, all grown in local gardens, for which the forest is cleared (but rarely burnt). Protein comes from wild pigs, occasionally fish, and canned food from dry good stores. Traditionally, the Mian people also hunted cassowaries but their numbers have decreased rapidly over the decades so that they hardly contribute to the diet anymore.

Lately, in the western area, agarwood (commonly known under its Indonesian/Malay name gaharu) has been found, a dark, resinous substance from which incense can be produced. Gaharu can develop in trees of the Aquilaria species, which are very sparsely distributed through the forest, and only as the result of an immune response to an infection. So while gaharu is a very valuable substance, it is exceedingly rare.